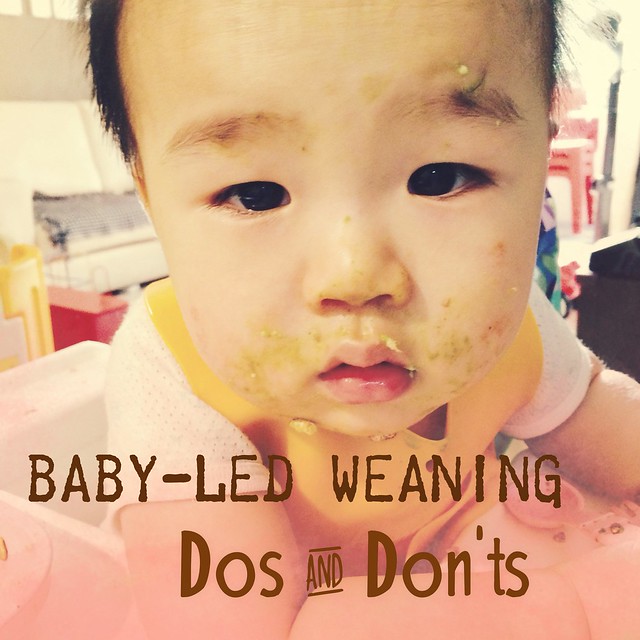 In a nutshell, here’s a list of things to watch out for when doing BLW.

These guidelines are from Gill Rapley, the author of the book Baby-Led Weaning. I didn’t always follow these dos and don’ts religiously – of course I have tried to hurry him a little by putting food into his mouth (we’re late for church!), and he doesn’t always eat whenever the family is eating (yeah, I know, so contrary to BLW, how dare we! But it works for us).

But some of these things ring true – for instance, keep trying to offer food which baby rejects at first. Best advice ever.

It takes Lil Pea some time to accept certain foods, which is more the exception than the rule, cos he LOVES food – but he comes around and starts eating a previously-rejected food after a few tries. It can take more than 10 tries over several months for a baby to accept a new food.

Giving up too early is one of the common food mistakes that parents can make, according to a nutritionist in a New York Times report.

What are some other food mistakes?

Forcing baby to eat – it will make him associate mealtimes with stress and anxiety, rather than discovery… and other good things.

See the other common food mistakes in the report.

Tip: When it comes to veggies, why not cook or toss them with some fat eg. butter, coconut oil, olive oil? Not only does this make them tastier, it also helps unlock their fat-soluble nutrients. Dress up your veggies and take them to town!

In another post, I talked about some of the myths of baby-led weaning, including parents’ anxieties over whether baby will choke. And if he ever does choke, I’ve included a handy video on first aid for a choking baby.

Righto, and here’s the guide of Dos and Don’ts of BLW by Gill Rapley!

1. DO offer your baby the chance to participate whenever anyone else in the family is eating. You can begin to do this as soon as he shows an interest in watching you, although he is unlikely to be ready to put food in his mouth until he is about six months old.

2. DO ensure that your baby is supported in an upright position while he is experimenting with food. In the early days you can sit him on your lap, facing the table. Once he is beginning to show skill at picking food up he will almost certainly be mature enough to sit, with minimal support, in a high chair.

3. DO start by offering foods that are baby-fist-sized, preferably chip-shaped (i.e., with a ‘handle’). As far as possible, and provided they are suitable, offer him the same foodsthat you are eating, so that he feels part of what is going on.

4. DO offer a variety of foods. There is no need to limit your baby’s experience with foodany more than you do with toys.

5. DON’T hurry your baby. Allow him to direct the pace of what he is doing. In particular, don’t be tempted to ‘help’ him by putting things in his mouth for him.

6. DON’T expect your baby to eat any food on the first few occasions. Once he has discovered that these new toys taste nice, he will begin to chew and, later, to swallow.

7. DON’T expect a young baby to eat all of each piece of food at first – remember that he won’t yet have developed the ability to get at food which is inside his fist.

9. DON’T leave your baby on his own with food.

10. DON’T offer foods which present an obvious danger, such as peanuts.

12. DO offer water from a cup but don’t worry if your baby shows no interest in it. A breastfed baby, in particular, is likely to continue for some time to get all the drinks he needs from the breast.

13. DO be prepared for the mess! A clean plastic sheet on the floor under the high chair will protect your carpet and make clearing up easier. It will also enable you to give back foods that have been dropped, so that less is wasted. (You will be pleasantly surprised at how quickly your baby learns to eat with very little mess!)

14. DO continue to allow your baby to breastfeed whenever he wants, for as long as hewants. Expect his feeding pattern to change as he starts to eat more solid foods.

15. If you have a family history of food intolerance, allergy or digestive problems, DO discuss this method of weaning with your health advisers before embarking on it.

16. Finally, DO enjoy watching your baby learn about food – and develop his skills with his hands and mouth in the process!

Stardust&Bloom started when I decided that I was learning so many new things as mummy to Little Pea, I just had to write it all down somewhere. From Baby Led Weaning, to healthy recipes, top places to bring the littlies, the best gear, learning and other parenting who-what-when-where-hows. Come join us!
- E-von & Li'l Pea